“There’s a sense of urgency with this demographic. They’re worried they’re going to be too late and miss out.”
In the Lower Village Gate project where Mr. Kutyan’s clients lost out, there have been only five sales in the two buildings in 2019.
Mr. Kutyan’s clients were ready with an offer well above the $1.6-million asking price, he says, because they had lost out on a unit in the same building one year ago and had been looking ever since.
The couple figured they would need to spend a minimum of $200,000 to renovate the unit.
The buyer who prevailed paid $1,312.56 a square foot for the unrenovated unit, Mr. Kutyan points out. The previous highest price in the building was $1176 a square foot, and that was for a renovated penthouse suite.
People who had planned to sell a house, buy a condo and have some money left over to spend in retirement are feeling the squeeze, he says.
“To get anything decent in the city of Toronto, you’re looking at $1,000 a square foot.”
Looking ahead, Capital Economics says the results of the upcoming federal election may bring some changes to the country’s housing market.
Both the Liberals and the Conservatives have proposed policies that could boost house prices after a decade of tightening lending restrictions, senior Canada economist Stephen Brown says.
Mr. Brown adds the effects of the proposals on house prices are likely to be small. Still, Canada’s household debt has continued to increase in the past 10 years, he says, and if the election were to mark the start of a pronounced shift in attitudes toward lending restrictions, it will rise further, he cautions.
Were a future government to loosen lending restrictions, Canada’s economic growth could rise in the short term, he says, but the economy would be even more vulnerable to a negative shock. ( The Globe and Mail, Carolyn Ireland)
toronto pushes for greener condos(2019.10.18)
​When Oxford Properties breaks ground on The Hub, a 57-storey office tower located near the foot of Bay Street next to Toronto’s venerable Harbour Commission building, the OMERS-owned development giant will embarking on what it claims will become the first “net zero” office tower in Canada.
Set to open in 2024, the glass-and-column high-rise, designed by London-based Rogers Stirk Harbour + Partners, will feature a full suite of emission-reduction systems, including triple-glazed windows, LED lighting, rooftop solar and a “dedicated outdoor air” system that uncouples the heating and cooling mechanisms from the ventilation network, an efficiency-boosting approach to standard HVAC (Heating, Ventilation and Air Conditioning).
Darryl Neate, Oxford’s director of sustainability, says the designers are also scouting around for other savings, including recycling waste heat and even the purchase of carbon offsets. Oxford aims to have The Hub, which is part of a Canadian Green Building Council carbon pilot project, certified as a LEED Platinum building.
Such projects will help the City of Toronto make good on a voluntary plan announced by Mayor John Tory earlier this month to work with large land owners and developers to accelerate their energy savings and emission reductions by establishing five-year targets. By most estimates, buildings account for about 40 per cent of all carbon emissions from human sources.

The “Green Will” partnership so far involves several of the city’s largest landowners, with a combined footprint of more than 300 million square feet. The list includes the city, Toronto Community Housing, universities, hospitals, school boards as well as private developers such as Oxford, Cadillac Fairview and Brookfield.
But when Mr. Tory announced the plan, which calls for benchmarking, auditing and retrofit capital planning, the list of participants didn’t include condo developers and apartment building operators, such as Tridel, Greenwin Inc. or Shiplake Properties. (Oxford’s portfolio includes some mixed-use multiunit residential buildings.)
In an interview, Mr. Tory says he’s continuing to reach out to apartment building companies, and also hopes to enlist the thousands of small landlords who own low-rise commercial structures, such as medical arts buildings, a category he describes as the “toughest” to reach.
And while the Green Will strategy aims to demonstrate the city’s leadership, Scarborough councillor Jennifer McKelvie says, it’s clear that one other large category of property owners is conspicuously missing from the plan: homeowners.
“When you think of where the carbon is in buildings, it is largely in the existing stock,” says Corey McBurney, president of EnerQuality, a third-party certification organization that works with developers and auditors to verify the energy efficiency ratings of new residential buildings in Ontario. “What are we doing to lower [homeowners’] carbon footprint? To date, we haven’t done nearly enough.”
His point highlights one of several obstacles in the city’s attempt to accelerate its decarbonization goals over the next 20 to 30 years, and also reveals the very different approaches to energy efficiency management employed by different categories of property owners and builders.
In general, the Ontario Building Code and the recently updated Toronto Green Standard have set a fairly high bar for new buildings. All new development applications submitted after May, 2018, have had to meet the first tier of the green standard, which requires the dwelling to be 15 per cent more energy efficient than what’s specified in the OBC. Builders who voluntarily exceed that target can qualify for various financial incentives, such as development charge reductions.
But these codes have little to say about how property owners manage the carbon performance of existing buildings. Some asset managers, especially large office developers such as Brookfield, have been aggressive in recent years in driving down energy consumption, using a range of emerging technologies, including building automation systems. The savings go to the bottom line. Firms such as Oxford even tie their managers’ compensation packages to meeting or exceeding energy reduction targets. “It’s about holding people accountable for results,” Mr. Neate says.
Mr. McBurney says a growing number of homebuilders now design dwellings to meet the EnergyStar rating, which requires a home to be 20 per cent more efficient than the OBC. About half of all new homes now carry the rating, he adds, noting that EnerQuality recently extended this certification to multiunit high-rise buildings.
With homeowners and small contractors, however, the story is quite different, with a far larger range of results. Some poorly designed home renovations or rebuilds can boost energy consumption, or do little more than meet the building code requirements. Others feature all sorts of energy efficiency or renewable energy features, from tankless electric hot-water heaters to roof-top solar systems.
While Ms. McKelvie notes that Toronto offers loans for such projects, she feels there should be more incentives available, and adds that the city could also be doing more to facilitate such investments, for example by providing homeowners with information on how to do group purchases of roof-top solar systems in order to reduce prices.
Mr. Tory added that his office has reached out to large Canadian financial institutions about developing new lending instruments, such as “green mortgages,” which offer reduced terms for borrowers investing in home energy retrofits. He was recently in London, talking to British bankers about such products. “There’s huge interest there in financial projects to help with green projects,” he says.
The hesitant homeowner problem could take a turn after the federal election. In an interesting ideological alignment, all four major parties are promising various inducements, including $40,000 interest-free home energy retrofit loans (Liberals), a 20-per-cent tax credit on “green” improvements worth up to $3,800 on a $20,000 project (Conservatives) and low-interest loans with repayment terms tied to energy savings (NDP and Greens).
Reflecting on what he describes as the “voluntary collaboration” model that underpins initiatives such as Mr. Tory’s Green Will program, Mr. McBurney describes these efforts as “positive,” but doubts they are sufficient, given council’s goal of accelerating the city’s emission reduction targets in light of a worsening climate crisis. As he says, “I wonder if the city will take an even tougher line.”
This article is part of an occasional series about recent advances in sustainable design and construction. (The Globe and Mail, John Lorinc)

MUCH HAS CHANGED IN FOUR YEARS-ARE LIBERALS FIT FOR THE CHALLENGES AHEAD? 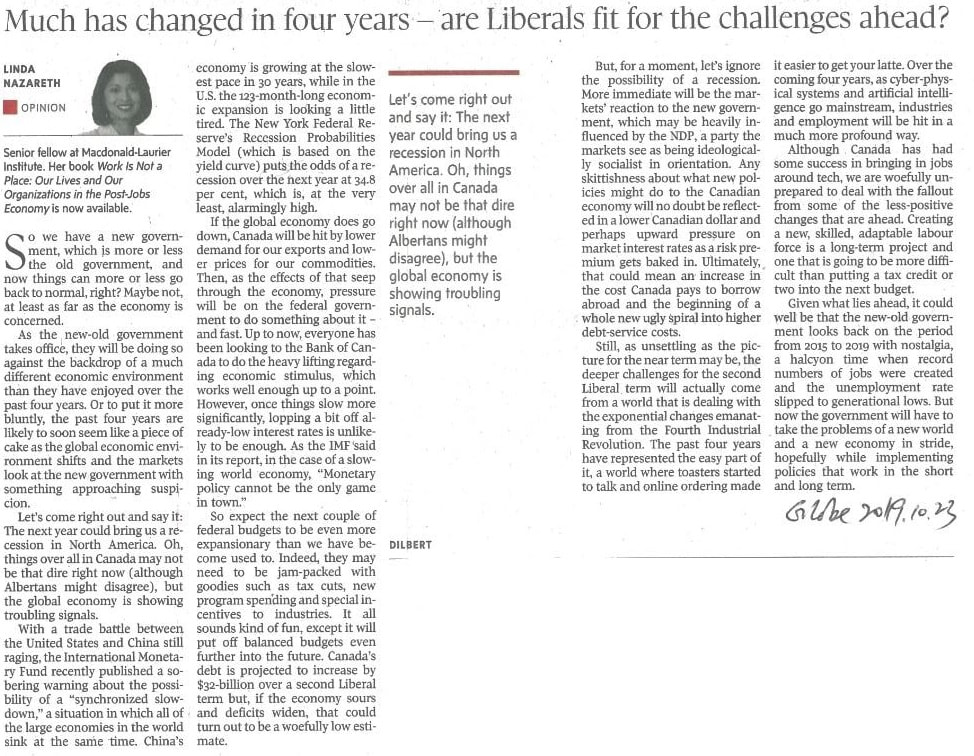 A door opens for affordable housing 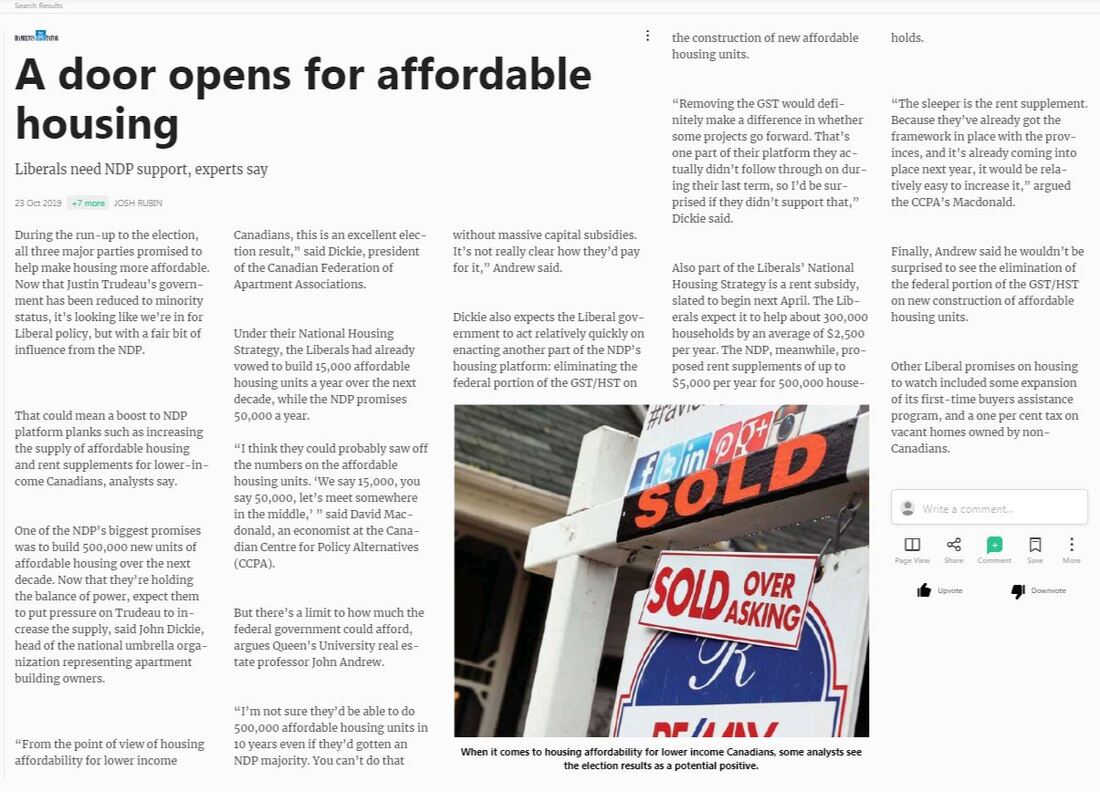 This could be the cause of the next housing crash 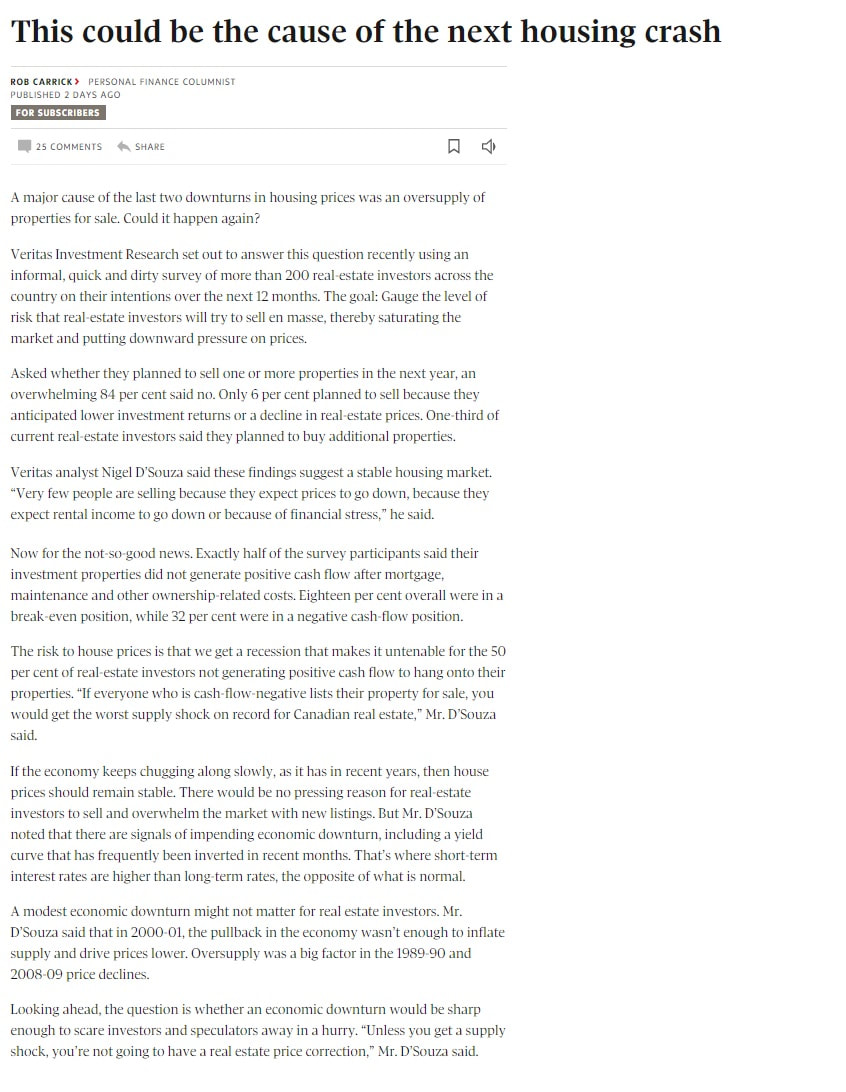 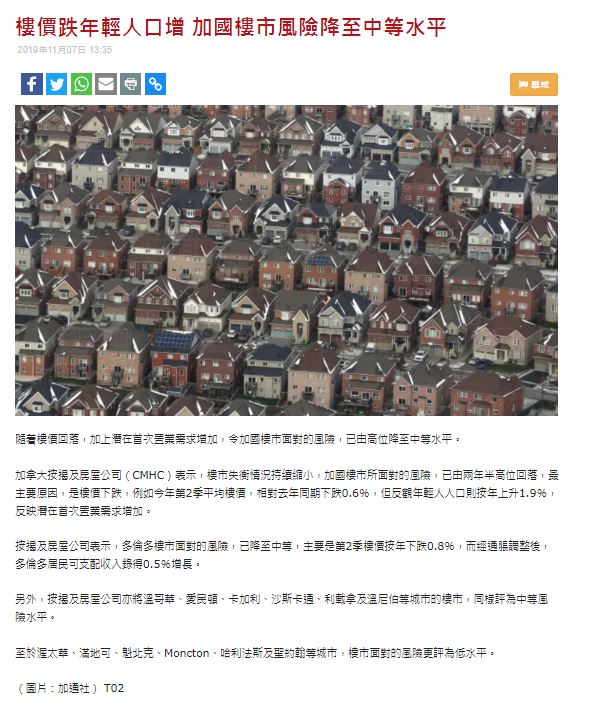 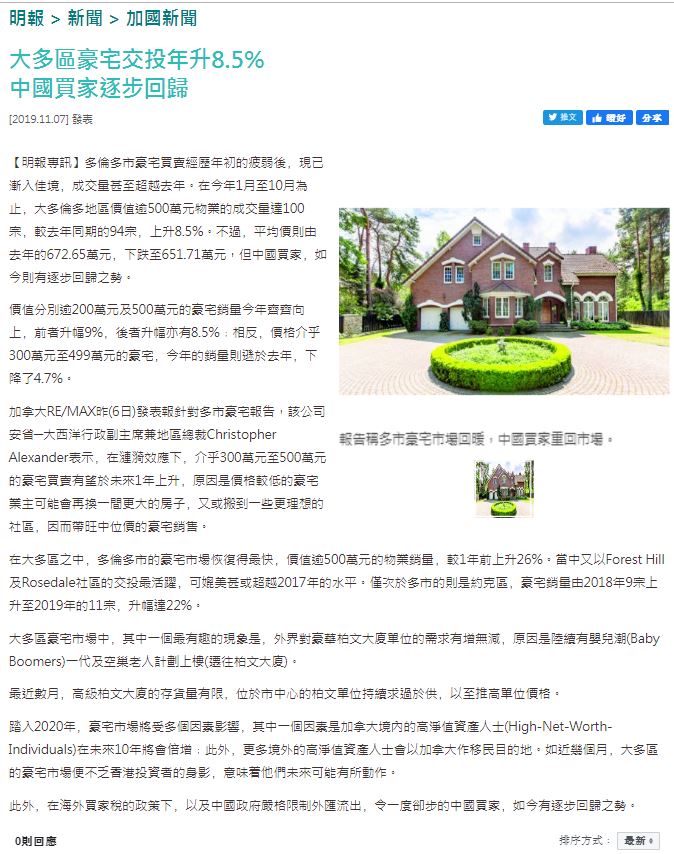 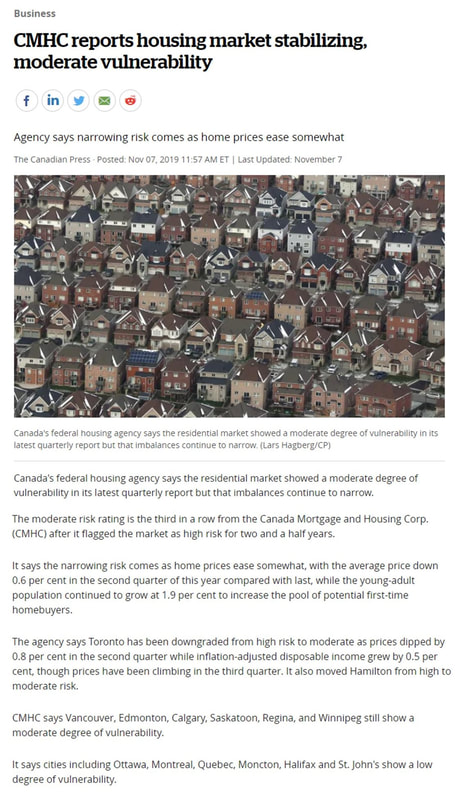 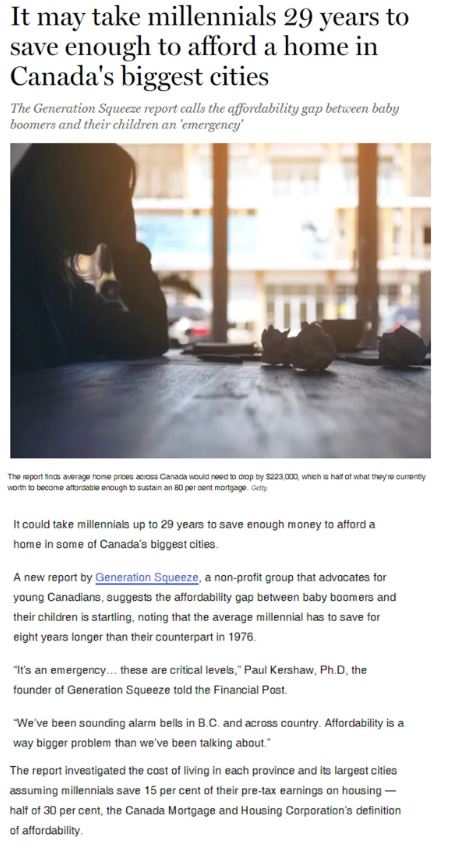 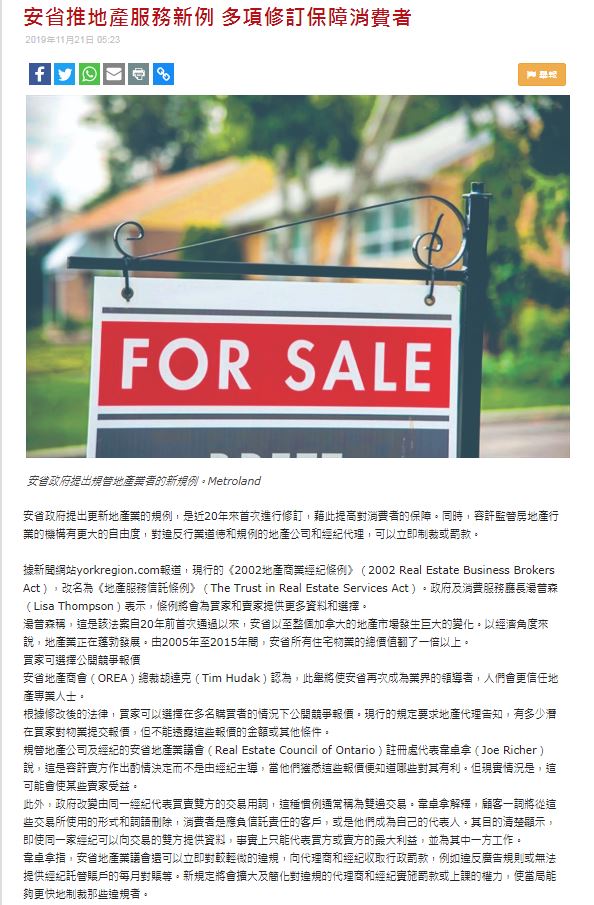 Ontario Government Strengthens Trust in Real Estate Services(2019.11.19）
TORONTO — Today, the Ontario government introduced a bill proposing changes to the Real Estate and Business Brokers Act, 2002 that would, if passed by the legislature, modernize rules for registered real estate brokerages, brokers and salespersons.
"Real estate salespersons and brokers are the experts for home buyers and sellers," said Lisa Thompson, Minister of Government and Consumer Services. "Whether a transaction involves a fixer-upper, a move-in ready dream home or a commercial property, every consumer should know that the person they are dealing with is professional, knowledgeable and accountable."
Between January and March 2019, almost 7,000 consumers and real estate professionals responded to an online government survey and consultation paper about potential changes to the act. The Trust in Real Estate Services Act, if passed by the legislature would address the need for a stronger and more ethical business environment, to protect consumers when making their biggest purchase.
For example, the Act would: "Today marks a historic day for Ontario REALTORS® and the home buyers and sellers they represent every single day. For years, Ontario REALTORS® have advocated for higher professional standards, stronger consumer protections and better enforcement of the rules governing real estate practices," said Tim Hudak, CEO of the Ontario Real Estate Association. "Today, we are grateful to the Ontario Government for delivering on its promise to update the Real Estate and Business Brokers Act, 2002, through the introduction of the Trust in Real Estate Services Bill. This Bill will modernize the rules governing real estate practices and ensure that the REALTOR®  at your side during the biggest transaction of your life has the highest professional standards, training and modern tools in North America."
"The Real Estate Council of Ontario (RECO) is pleased to have worked closely with the Ministry through the consultation and development of this important piece of legislation," said Michael Beard, CEO RECO. "The updated legislation will provide enhanced protection for consumers and provide additional clarity for registrants around their role and responsibilities to both the buyer and seller. These changes are a reflection of the rapidly changing and modern marketplace and will help to ensure that consumers are protected when they make the biggest purchase of their life."
Quick Facts
Background Information
Additional Resources
安省地產需求強勁 明年樓價料漲6.5%（2019.12.31） 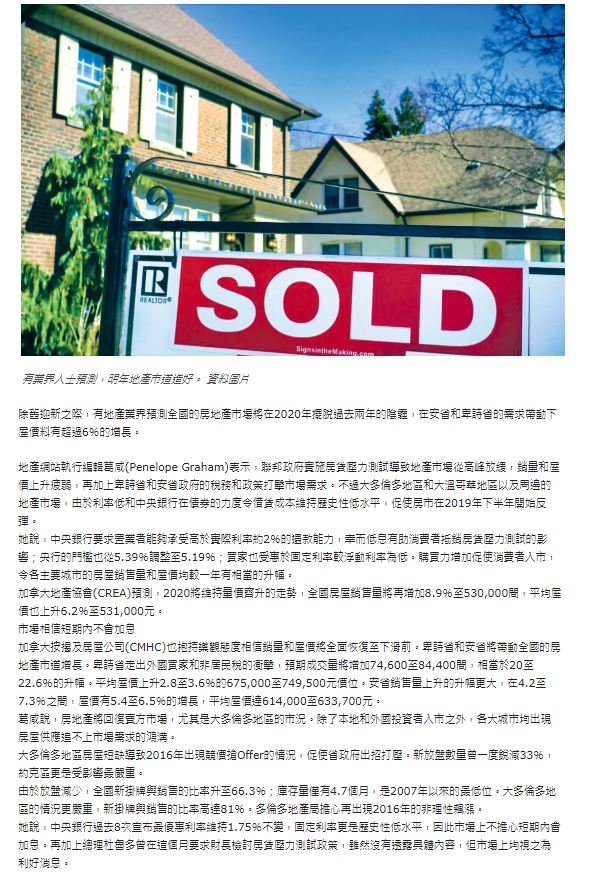 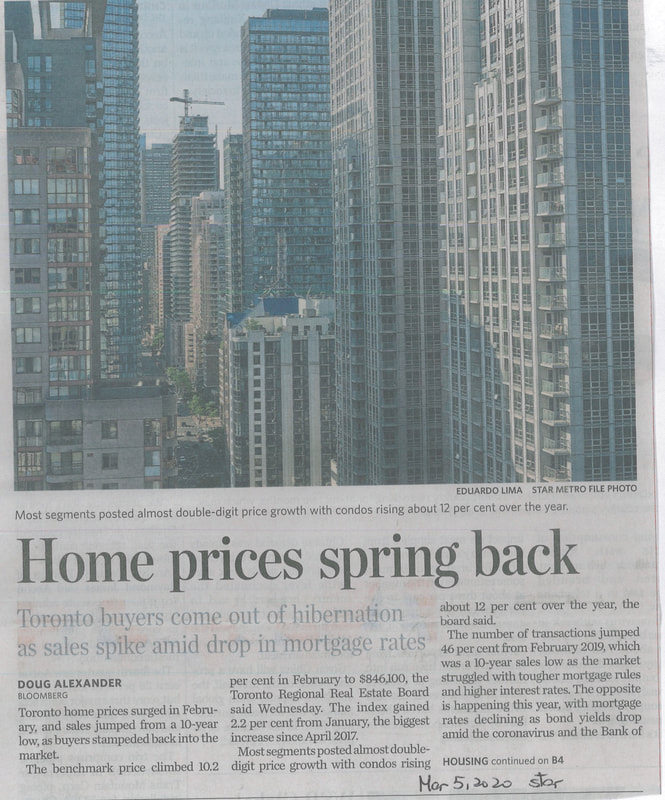 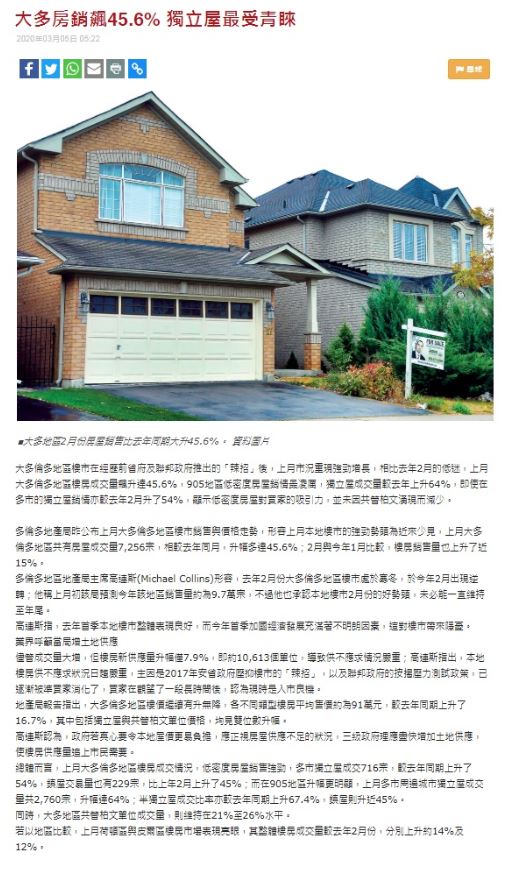 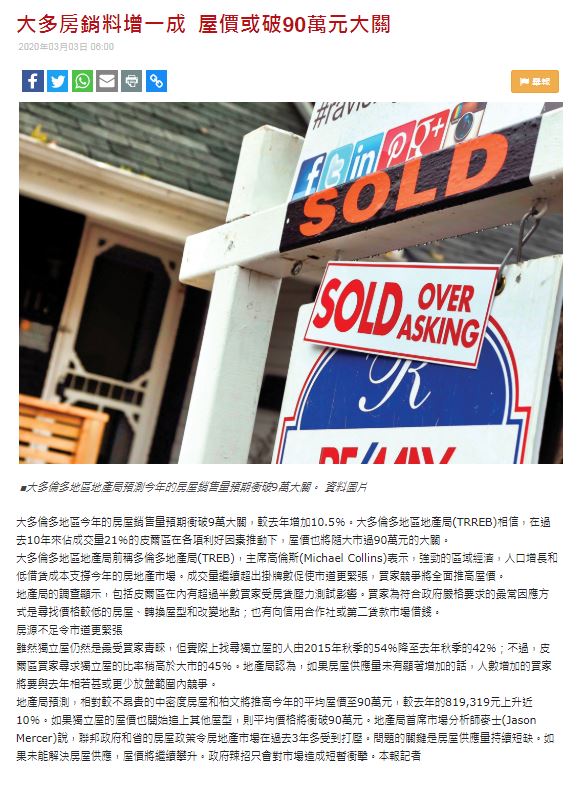 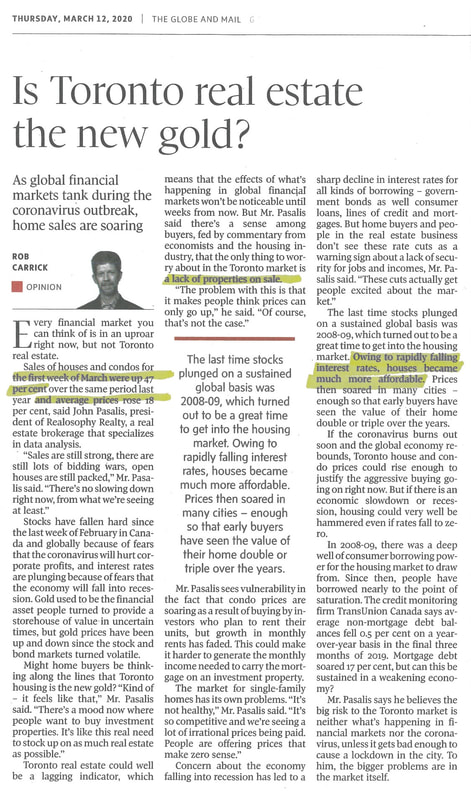 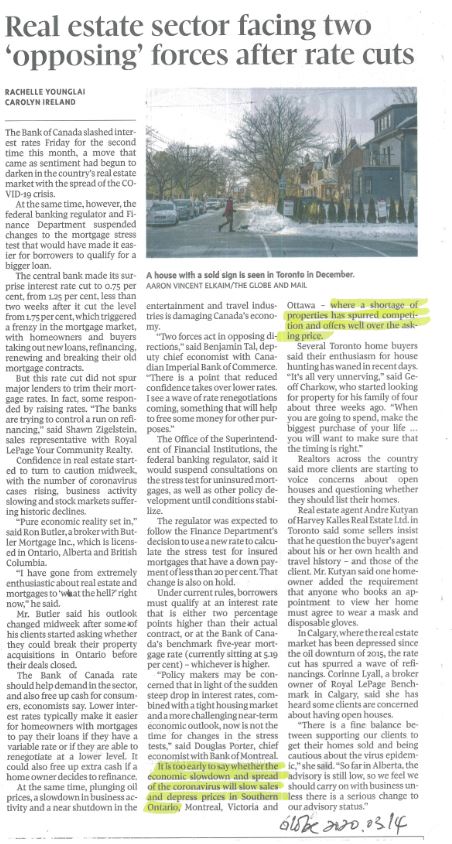 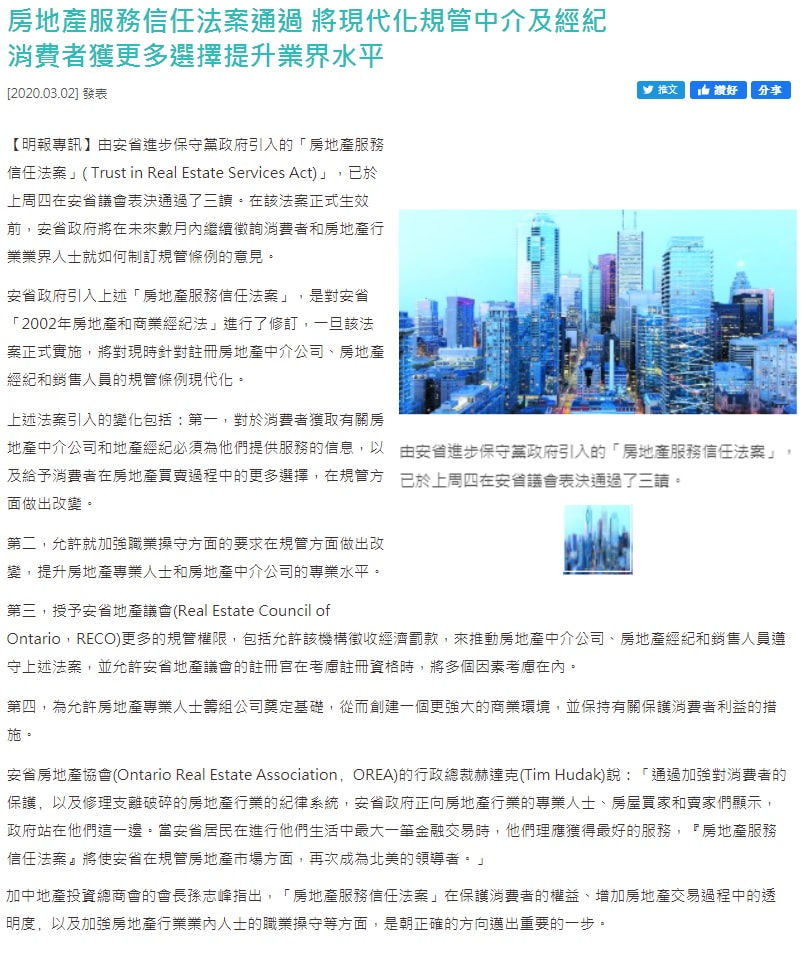 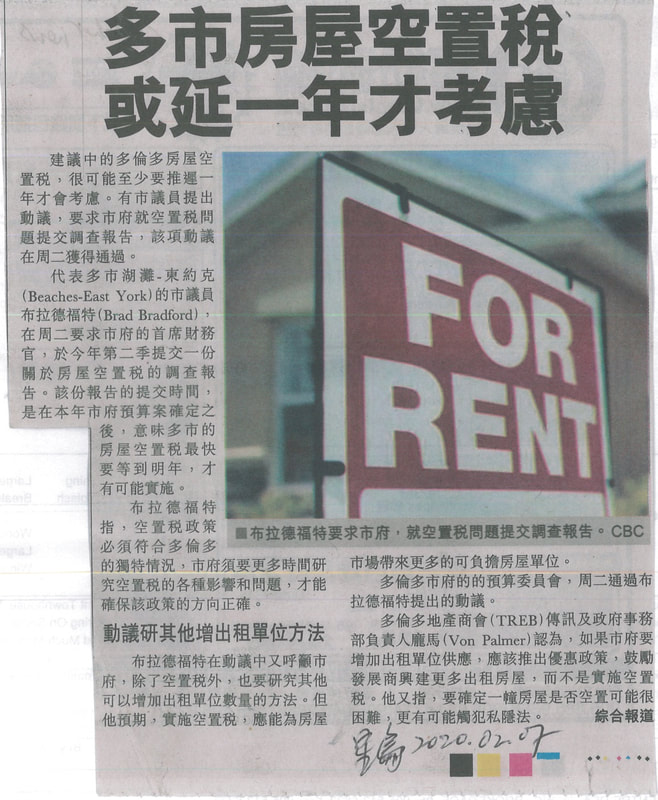 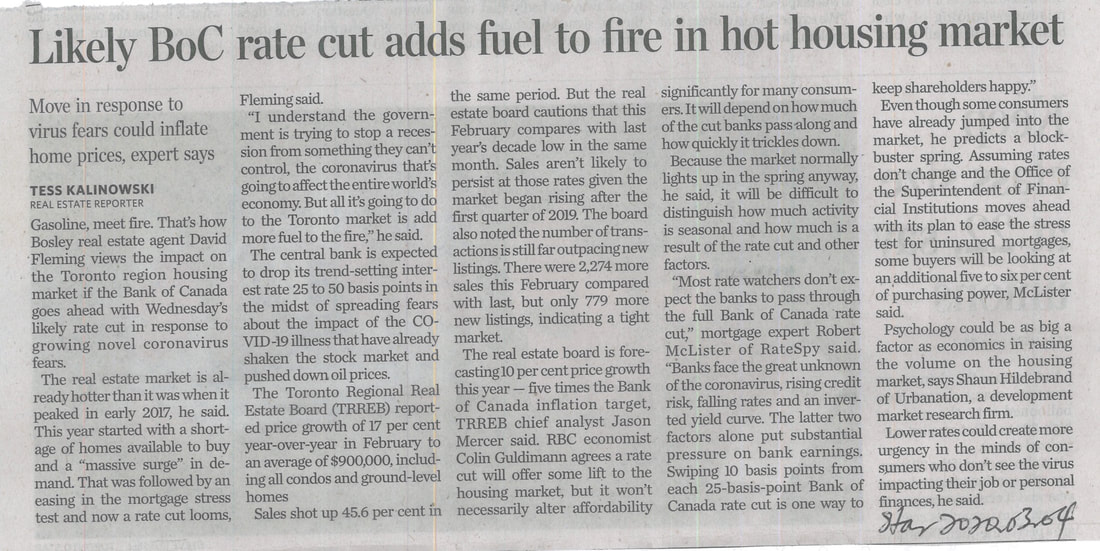 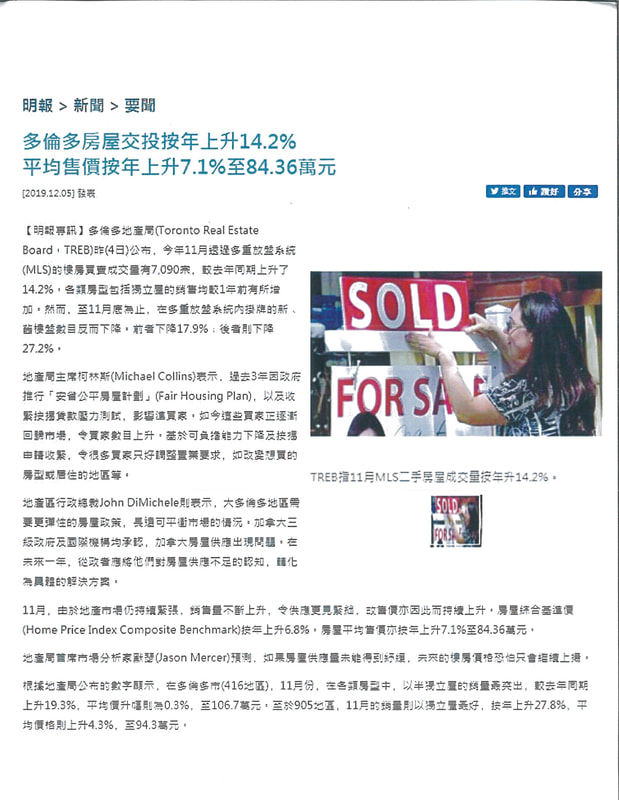 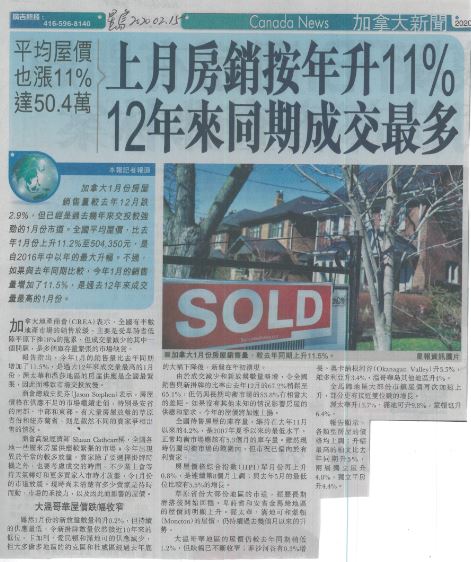 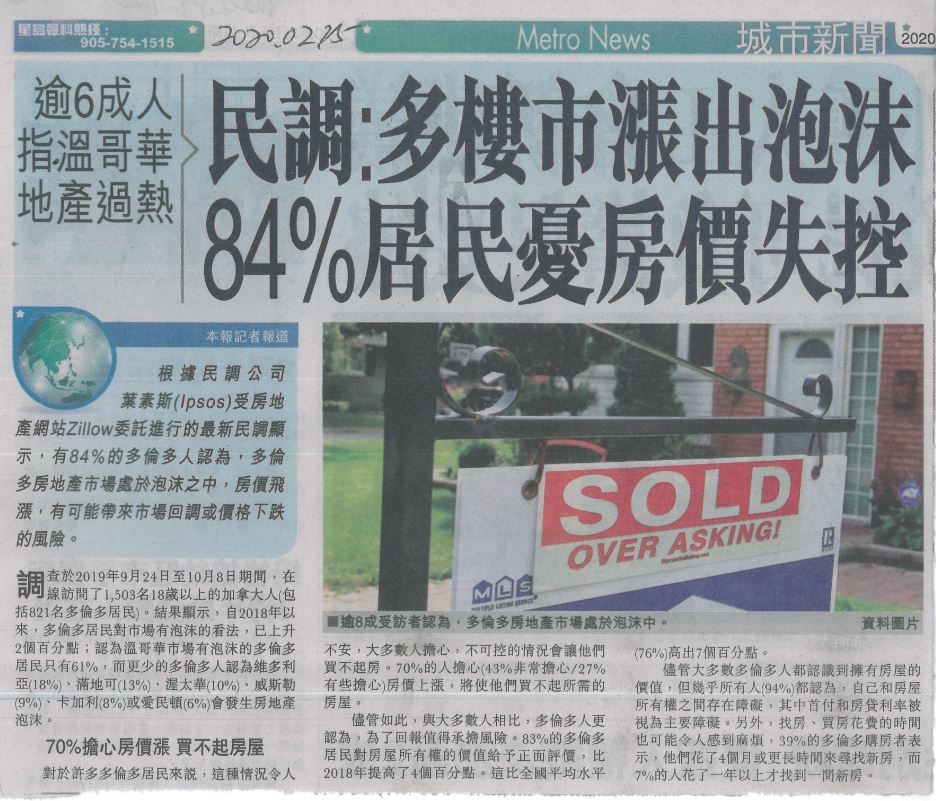 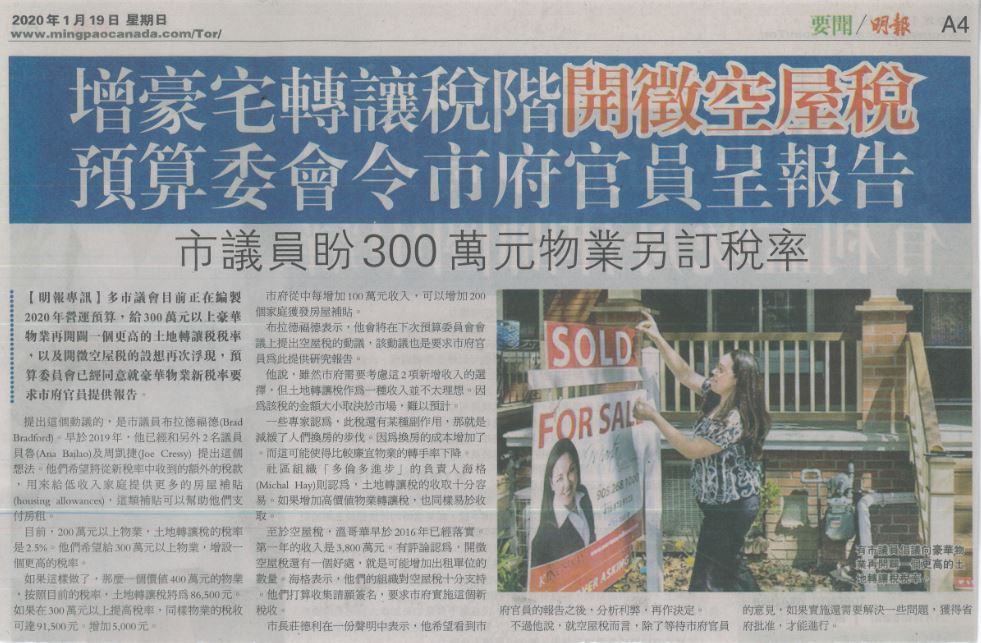 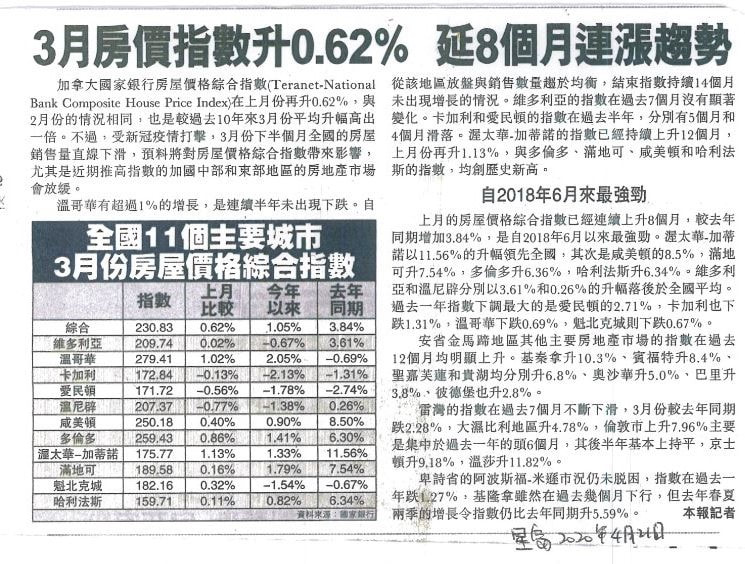 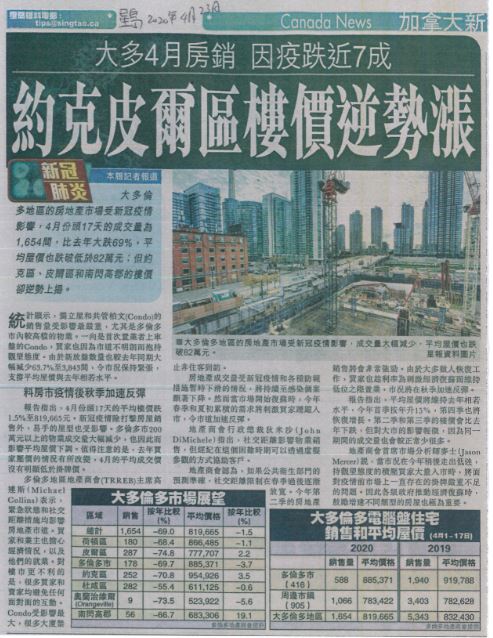 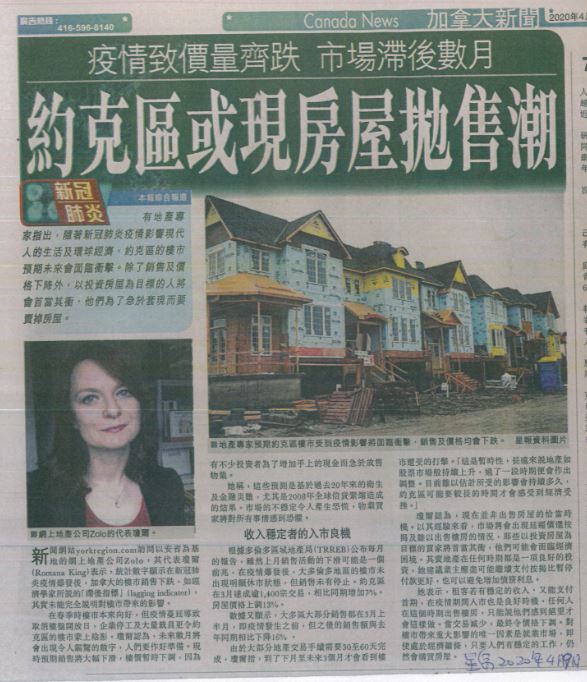 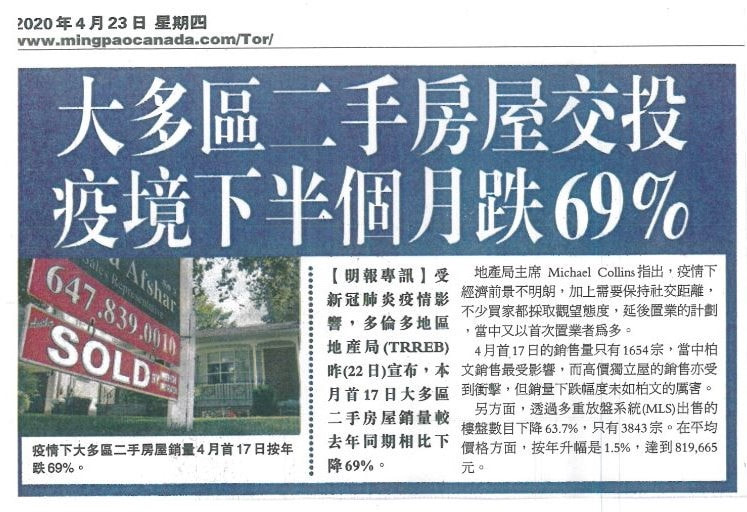 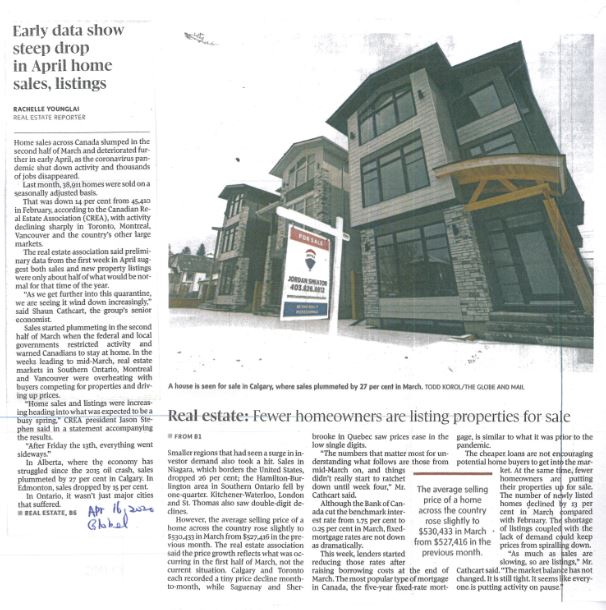 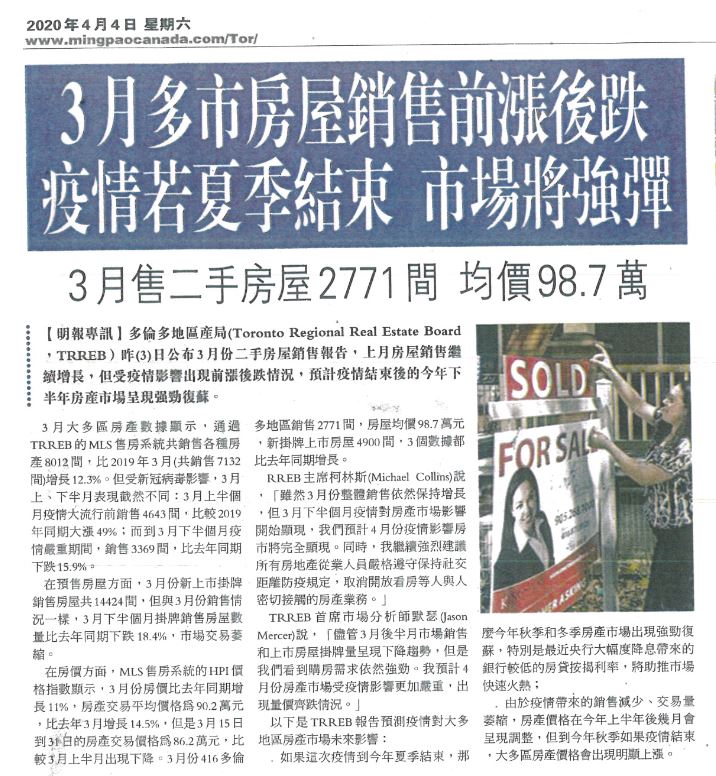 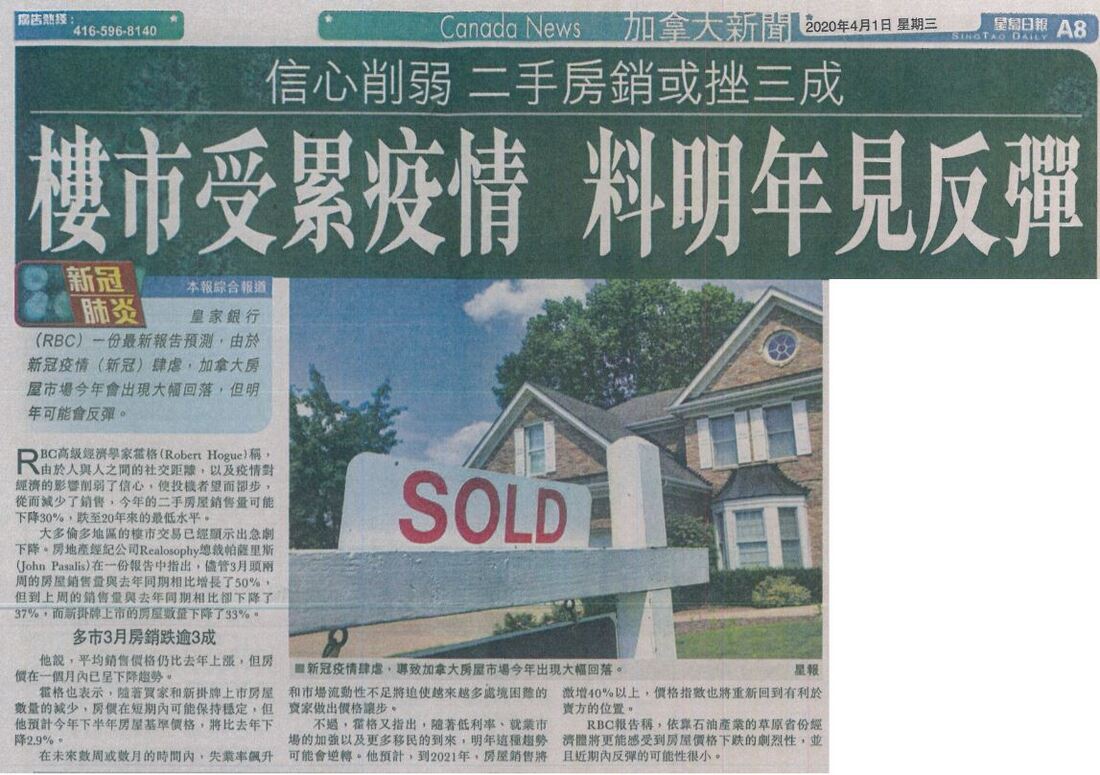 Setting the record straight on urban density and the coronavirus